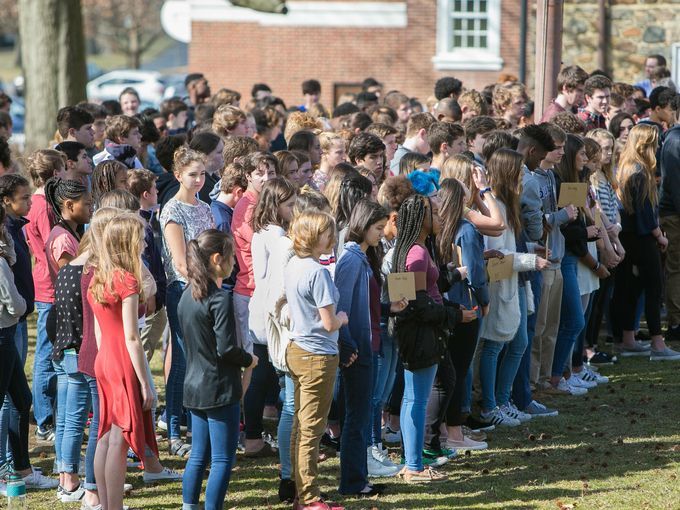 WFS students seen at the walkout

On February 21, 2018, Wilmington Friends students proved that actions really do speak louder than words. Abigail Vandenbrul ’20 and Casey Tyler ’20 organized a walkout in support and remembrance of the victims of the tragic school shooting in Parkland, Florida at Marjory Stoneman Douglas High School. At noon, upper school students left their classes and gathered at the front of the school under the flagpole. They stood there in silence for 17 minutes of meeting for worship- one minute for each of the victims.

Wilmington Friends School was not alone. Vandenbrul said, “I decided to organize the walkout because I was very upset about what happened in Parkland, and I wanted to do something that could spark change. I got the idea, and directions from a twitter page called students walkout.” Thousands of students from other schools also participated in the walkout and held another one nationwide on March 14th.

In the crowd, students held signs with the victims’ names and ages on them. Other students held signs reading, “Enough is Enough” and “Never Again,” which have become rallying points for the movement. All across the nation, students have joined together under a common belief- a belief that all students should be able to go to school and be safe. A belief that never again will something so horrific happen. A belief that enough is enough, and if law enforcement will not be there to protect them, then it is up to them to speak up and make the change they want to see.

When asked why this event was so important, Casey Tyler ‘20 said, “It was a big deal because there have been shootings before and nothing has been done and after a while, we need to stop talking and bring about action.” In 2018 alone there have been multiple school shootings. However, only after the Parkland shooting did this nationwide call to action occur. What was the difference? Immediately after the shooting, students recognized that there was a problem and if no one else was going to fix it, it had to be them. Sometimes it feels like students have no say what happens, but that’s not true.

The turnout for the event was very high for a small Quaker school, and even the press showed up to take pictures and videos. Vandenbrul commented that she “was so amazed by the number of people who came out, and I was so surprised that there was press there. Seeing so many of my classmates standing out by the flagpole made me so proud.” While there were students who stayed inside, most chose to go outside and stand with their fellow classmates. Tyler commented that he, “Decided to participate in the walkout because I heard that there was a tragedy and there was a friend that wanted to do something.” After something so horrific happened in Parkland, many students felt that something had to be done.

Speaking up and taking action can make a huge difference. Vandenbrul explained that “I think it was so important to do just to start an important conversation, even just within our school.” The middle school students at Wilmington Friends also planned their own walkout on March 14th, which also demonstrated strength and respect for the victims. By sparking conversation and applying pressure on Congress to initiate change regarding gun control, Florida students have inspired others to make an immense difference in countless lives. By gathering in Meeting for Worship for seventeen minutes, Wilmington Friends students have continued their work, honored the fallen victims, and shown support for change.