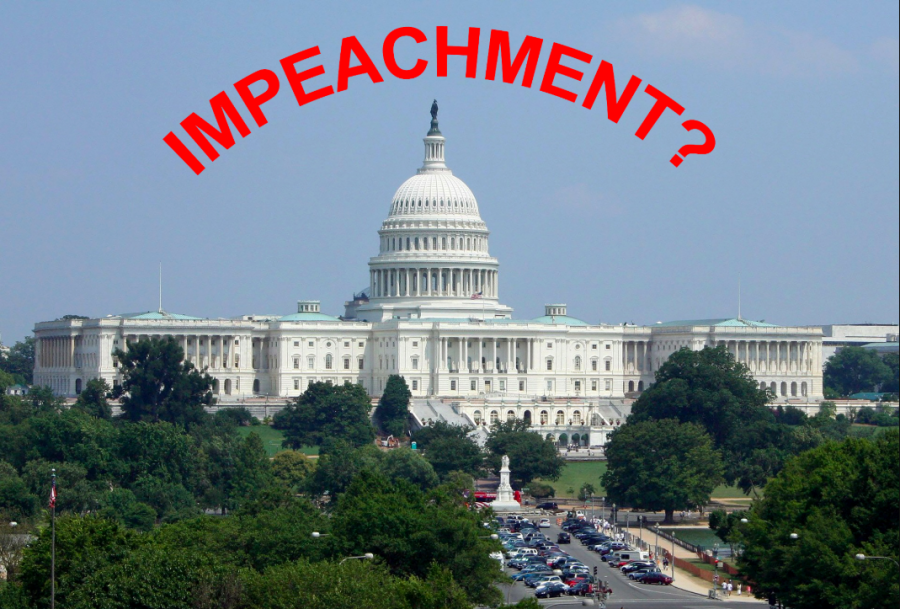 Donald Trump has been an extremely controversial figure ever since he announced his campaign for president in June 2015. The race between Donald Trump and Hillary Clinton was filled with shocking statements from both sides and many alarming secrets being exposed. Even after winning the election, Trump’s nonstop stream of buzz and tweets have not come to an end. This presidency is unlike any seen before in history and now it is completely possible that Donald Trump will become the third president ever impeached in the history of the United States of America. There are many reasons why he is being impeached but there are also arguments against the impeachment.

One reason that he is in the process of impeachment is due to his dealings with Ukraine. A phone call between Trump and Ukranian president Volodymyr Zelensky was intercepted on July 25 and includes Trump urging Zelensky to investigate a conspiracy theory involving Joe Biden, his opponent in the upcoming election, in order to do damage to Biden’s name. Legal analyst, Michael Gerhardt, said that “when the Framers talked about impeachable offenses, they mentioned the President engaging in a corrupt relationship with a foreign power.”

Trump also froze $391 million that was going to Ukraine, an ally of the United States of America, while Ukraine was involved in an armed conflict with Russia. They were told that the money would be released when their president announced an investigation into the Bidens. This is believed to be due to Trump’s desire to hurt his opponent. This can be impeachable because Trump put national security at risk for his own political purposes. Democratic lawmakers have called this bribery, another impeachable action. However, Ukraine ended up receiving this previously withheld military assistance. The United States released the $391 million on September 11. This shows to many that this action was simply more of a show of power than a true threat to national security. While many democrats believe that Trump is abusing his power as president, some people have argued that he is not abusing his power as he has unlimited power in the area of foreign arrangements. It is also arguable that because nobody knows exactly what the president is thinking, it is hard to prove the relationship is corrupt. While it is strongly believed that Trump is pushing for an investigation into Biden in order to win the election, it is very difficult to truly prove this without a look into the president’s mind, something that is unattainable.

Some people within our community at Wilmington Friends School also have opinions on the impeachment of President Donald Trump, but many do not pay attention to the events of the impeachment. When asked, Teddy Devoll ‘21, said “I don’t know. I don’t really pay attention to it.” This response was common among WFS students and faculty. Sarah O’Brien, high school chemistry teacher said, “I honestly have not been following it. That’s why I am the worst person to ask about this because I truly do not pay attention to it. My husband makes fun of me all the time.” One WFS student, Ava Cottone ‘20 said, “I think he should be impeached because he is a cheater and a fake.” Many people are not well enough informed about the impeachment.

Overall, the impeachment could end up going either way. There are valid arguments on both sides of the conversation. Trump could be impeached for merely withholding the money for a short amount of time if the democrats have enough votes. However, it is still early in the case and there is much that can still happen. It will be interesting to see the outcome.